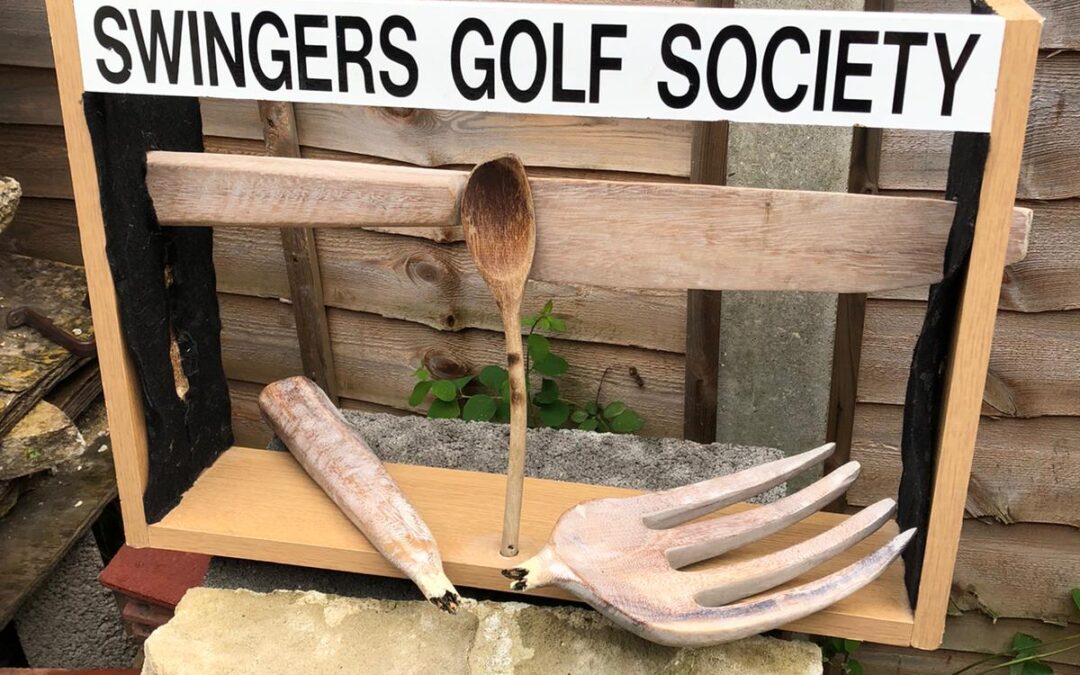 In unforgiving windy conditions, at an impressively revamped Paultons Park, Jimmy Charman survived a late wobble to scoop his maiden swingers title. Jimmy ended the day level par, with a 4 on the 445 yard 17th ultimately proving to be the deciding factor in his win.

It’s been a delayed start to the 2021 season, and the enforced lay off seemed to reflect in the scores, as for the first time in over 3 years nobody came in under par. Having said that though, Paultons, described by some as a ‘Mickey Mouse’ course, proved to be every bit as challenging as some of the more we respected courses we’ve played.

Jason Hardy mainly had a day to forget, but had small cause for celebration. Using a borrowed driver, which sources tell us he’s now made a bid for, his tee shot on the second couldn’t be beaten and the longest drive accolade was his for the day.

One of our very first sponsors, Town and Country Communications, have once again come back on board for the new season. To celebrate this fact, head honcho Lee Butler kept his name in lights by scooping his second nearest the pin in as many events on the par 3 8th.

Our resident master baker, Pete Joy, served up a delicious treat of the golfing kind, making mincemeat of the potentially daunting 15th. His effort to within 10 foot ensured a sweet ending for BH24’s finest.

Finally, on the 18th, Dave Allen showed an elegant touch to walk away with the nearest the pin in 2 prize. A small green was no obstacle for Dave, finishing the round on a high to kick start his season with some bonus points.

There were a few in contention for the dreaded wooden spoon throughout the day. Matt Carder though, who is in trouble for disappearing quicker than dynamo, was the seasons first recipient. The spoon however, has been since been injured. Reports are that Jackie Chan, annoyed at a duff chip, laid the sacred spoon over two breeze blocks and channeled his inner Cobra Kai. Reports on the condition of the spoon will be with us as soon as we have more.

So a shout out to Jimmy, months after his first child, he secured something even more precious in joining the Swingers Winners circle on his birthday weekend.

Next event is at Hockley on the 18th June. Until then, just keep swinging…