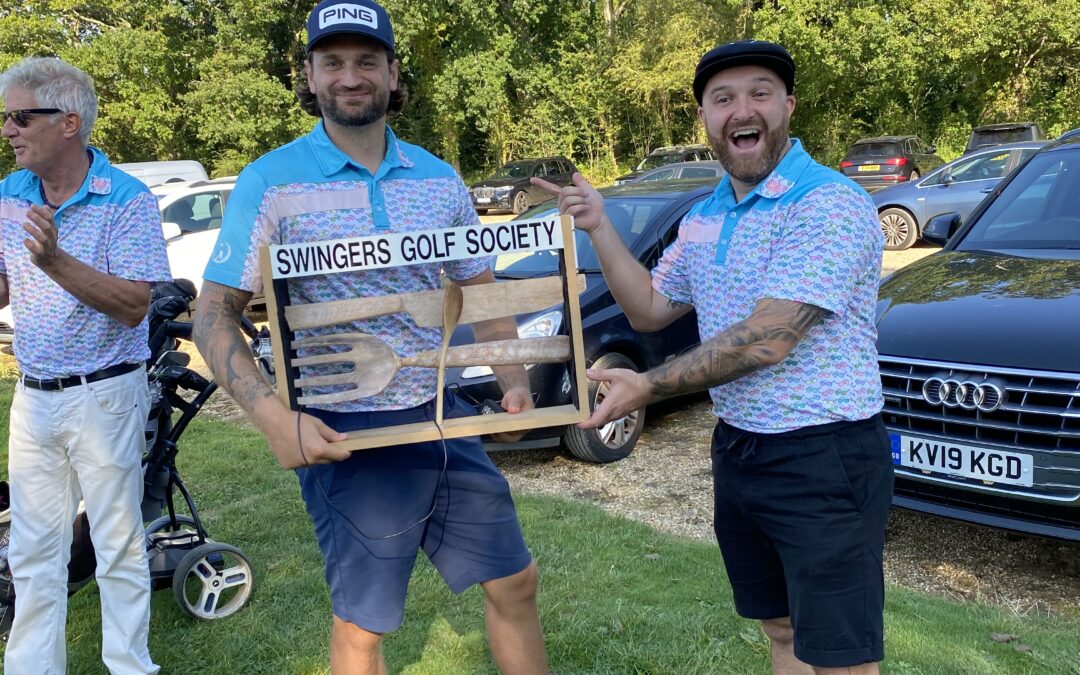 It’s not often there is a bigger story than a 7 under par victory margin. However, unfortunately for Big Moz, who claimed his maiden title after knocking on the door for so long, the news that the founder and El Presidentay of the Swingers claimed a wooden spoon award before a victory himself, has sent shock waves rippling through the society.

It has to be said that Chilworth is in the lower echelons of courses in the Swingers calendar. Many complaints were made throughout the field of long and slow greens, poorly kept bunkers cough PC cough and some quite extraordinary slow play from others not attached to the society. Nevertheless, as the saying goes, you can only beat what’s in front of you, and Big Moz certainly did. -7 in those course conditions is a sensational return and huge congrats to Paul who has now reached the pinnacle of his already distinguished sporting career by joining the winners circle.

There were some early tee offs in the group as Ben Richards, Jackie chan and the Sheriff had to rush back to blighty to get themselves ready to play pass the nappy, baby name bingo and where’s my dummy at a now infamous baby shower.
Ben though, clearly pumped after his morning bottle, became the first player in Swingers history to win the Nearest the pin in two by making an Eagle. A dog leg left playing around 286 yards his tee shot settled around 6 foot from the hole. Despite the green conditions he rattled the putt in to claim the plaudits and make it night on impossible to be beaten.

Jason Hardy is as good a driver as Max Verstappen, and this was proven once again with him claiming the longest drive prize on the 3rd par 5 of the day. Although I’m sure Max wouldn’t lock his keys in his car!

Dave Small made a name for himself in a golfing sense for a change, and took home the first nearest the pin prize of the day.
Big Moz completed his day of glory by snaffling the last nearest the pin of the day, claiming more points for his title charge.

But the biggest battle of the day ended up between two of the Remedy crew, for the coveted wooden spoon. Jake Quickenden needed to par the last to avoid taking it home and duly pulled it out of the bag, quashing his putting demons by knocking in a 3 footer to ensure Mr Taylor won the privilege of housing the spoon.

Luckily for Shane (and Penny who has already made a formal complaint) the spoon will only be there for a couple of weeks as the next event is the 2nd of October at South Winchester. We look forward to seeing you all there and until then, a huge well done to Big Moz and as ever, just keep Swinging.